Impact of covid-19 on child nutrition and welfare 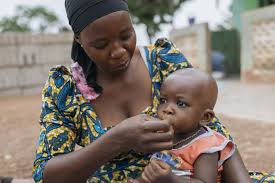 When Hamdiya Yakubu’s three-year-old granddaughter had an asthma attack on July 15, she chose to manage it at home instead of going to the hospital.

“I was afraid that they will test her for coronavirus and detain us in the hospital,” she explained.

Hamdiya is one of many families who are now scared to visit the hospital as a result of covid-19. At the nutrition unit at the Baptist Medical Center in Nalerigu in the North East Region, hospital attendance has dropped significantly. The nutrition officer, Abubakari Amos, revealed that there is unprecedented low turnout at the center.

“There is a high incidence of malnutrition in this area, by now, the ward would have been full, but the whole of June, we had only three patients, this has never happened before,” he lamented.

The outbreak of COVID-19 has had a huge impact on the general welfare of children globally. Stakeholders around the world responded to the outbreak of the pandemic without any special arrangements for children.

The Head of the Department of Surgery at the Tamale Teaching Hospital, Professor Stephen Tabiri, revealed that the novel virus caused fear and panic among hospital staff.

He conceded that despite their vulnerable nature children were largely overlooked across the globe. “The spread in Tamale Teaching Hospital, among the staff, was as a result of a child, the mother was positive, the child was positive, he was given birth, he went to the neonatal intensive care, ignoring it, and eventually he infected a lot of healthcare personnel at the Teaching Hospital, it’s because we are ignoring them they are vulnerable and therefore we are ignoring them,” he disclosed.

SEND Ghana, a non-governmental organization based in Tamale, has in the last three years, implemented the People for Health Program (P4H). A core component of that project is the promotion of child nutrition.

According to the Programs Manager Mohammed Mumuni, though the northern region has made significant progress in reducing the incidence of malnutrition and its related problems among children, COVID-19 could derail the successes chalked. He, therefore, called on stakeholders to intensify efforts to address the situation.