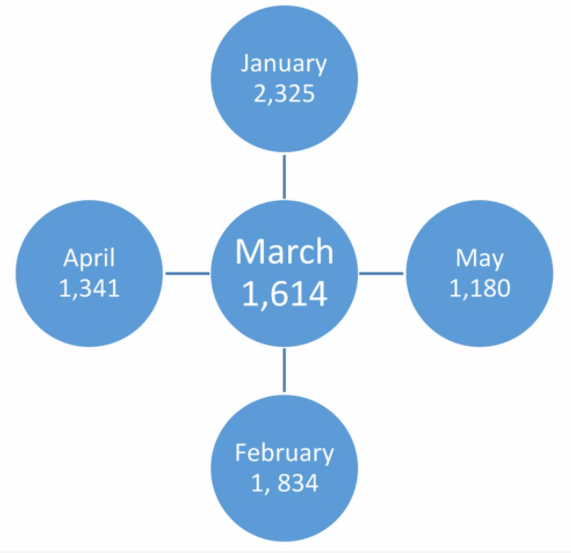 As the COVID-19 pandemic spreads rapidly around the globe, including Ghana, there is an urgent need to aggressively tackle the novel coronavirus while ensuring that other killer diseases such as malaria are not neglected.

The contrary seems to be the understanding of some Ghanaians, especially when the Ghana Health Service has advised that patients with mild or moderate health conditions should visit the hospitals only when their conditions advanced to the severe status.

At Somanya Polyclinic in the Yilo Krobo Municipal in the Eastern Region, two children under age 5, have passed away following severe malaria as a result of reporting late at the facility.

Some pneumonia fatalities were also recorded within four hours upon reaching the clinic due to overly stayed at home.

Confirming the mortalities to Rite FM, Dr. Wisdom Owulaku who is the Medical Director at the facility said, “We have recorded some unusual deaths from severe malaria who passed on while giving receiving first aid.”

“If the COVID-19 wasn’t around they probably would have come earlier to be attended to and, these preventable deaths wouldn’t have happened,” Dr. Owulaku stressed, as a revelation from their assessment on the situation.

Meanwhile, the World Health Organization (WHO) prior to the World Malaria Day has called on Sub-Saharan Africa to minimize disruptions to malaria prevention and treatment services during the COVID-19 pandemic.

“Severe disruptions to insecticide-treated net campaigns and access antimalarial medicines could lead to doubling in malaria deaths in Sub-Saharan Africa this year compared to 2018,” according to a new modelling analysis released by WHO and partners ahead of World Malaria Day.

Even though patients attendance to hospitals in some parts of the eastern region reduced sharply since the outbreak of coronavirus, Dr. Wisdom Owulaku noted that severe malaria, upper respiratory (common cold), pneumonia, hypertension and diabetics were the status of clients who visited his facility over the period.

But according to Dr. Wisdom Owulaku, pregnant women honors their routine antenatal clinic in their numbers.

From Agormanya St. Martins De Porres Hospital in the Lower Maya Krobo Municipal, attendance has fallen by half since the outbreak of COVID-19.

But Dr. Stephen Kusi, the Medical Superintendent of the hospital said, the fall could be due to fear of stigmatization for covid-19.

Records from the Somanya Polyclinic shows that, attendance keeps decreasing sharply since January this year, but decreased at an increasing rate in the COVID-19 era.

According to Dr. Wisdom, the period of April to July is noted for their peak moment, where more patients come to the clinic.

Speaking to some few patients from the Atua Government Hospital as of Monday, 8 June, 2020, some said they hear rumuors that COVID-19 infected persons are kept at the facility, and for fear of coming in contact with the disease, buying from chemical drug stores is preferred to the hospital when their conditions are not worse.

A nurse on duty at one of the health facilities said, some patients go to private health laboratories to confirm their conditions before appearing at the hospitals.

“Out of panic and fear of COVID-19, a gentleman who came here for malaria treatment, first went to test at private laboratory and after he was confirm positive he showed up for treatment,” a nurse (name withheld) said.

Rate Of Malaria Prevalence Amidst Covid-19

According to a World malaria report in 2019, it is said that Sub-Saharan Africa accounted for approximately 93% of all malaria cases and 94% of deaths in 2018. It went ahead to say, estimated tally of malaria deaths in sub-Saharan Africa in 2020 would reach 769, 000, twice the number recorded in the region in 2018.

It is critical to note that, in the event that COVID-19 disrupts access to core malaria control tools during the pandemic, where all insecticide-treated net campaigns are suspended and a three-fourth reduction in access to effective anti-malaria medicines; the above report according to the international health giant is more likely to be real.

Verifying the potential of the WHO analysis from the Yilo Krobo Municipal Health Directorate, the months; March and April gave the following records.

From the table above, a total of 3, 186 malaria cases were recorded in March and April, 2020. Separating, 913 of the number were children under five years. Meanwhile, females form majority of patients who tested positive for malaria with over half (1, 840).

Following the trend of growth in malaria cases, suggestions are that; mass vector control campaigns should be accelerated, while ensuring that they are deployed in ways that protect health workers and communities against COVID-19 transmission. Preventive therapies for pregnant women and children must be maintained. The provision of prompt diagnostic testing and effective antimalarial drug education and administration must be strengthened.