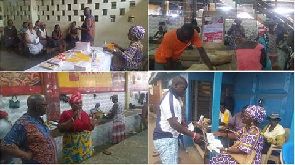 The Janok Foundation, a community-based organisation in the Ablekuma Central District, has educated the Kaneshie Market Women on basic hygiene as part of this year’s World Health Day.

The Day was on the theme: “Universal Health for All,” which was organised to sensitise the women to live healthy lifestyles to avoid sicknesses and frequent visits to the hospitals, and improve on their income.

Janok Foundation organised the programme in collaboration with SEND-Ghana, an international non-governmental organisation, the Ghana News Agency and Penplusbytes.

It was funded by the United States Agency for International Development (USAID), and it forms part of activities under the “People for Health (P4H) Project.

The women were taken through HIV/AIDS, sanitation, tuberculosis, effective hand washing, breastfeeding and the need for landlords to provide household toilets for their tenants.

Mr Andrew Abbey, a Director at the Accra Metropolitan Health Directorate, in an interview with the Ghana News Agency, said the Directorate attached importance to the awareness creation due to lack of basic hygienic practices among the people.

He said so many diseases were acquired through unhygienic conditions in the markets and urged the leadership to encourage its members to mobilise and improve sanitation within their surroundings.

She said when patients were accepted they would open up to discuss their situation, access health services and help to educate others.

Madam Oku said people living with HIV/AIDS had the same rights and liberties to move around as the rest of the population.

He called on the market women to attach special importance to environmental sanitation to reduce the outbreak of diseases.